Aberion is the leader of the Flame Dawn, famous for leading every offensive.

In the days of the warring factions on Talich, Aberion came to an agreement with Orion where the Flame Dawn would leave Genesis Industries alone if the latter sold them weapons. Using this advanced weaponry, Aberion and the Flame Dawn managed to conquer the rest of Talich, creating an apparent peace between the two remaining factions. However, Aberion's aggressive and expansionist nature quickly led to further hostilities which were cut short by the opening of the rifts.

Although Aberion no doubt played a prominent role in the exploration and subjugation of the Untamed World, the lore follows his Field Commander, Bromich, far more closely. Little is known of Aberion's actions until after the Overseers arrive, whereupon he quickly allied with them. Hearing that Orion was experimenting on a cure for the Virus, Aberion shared the Overseers' fears that the leader of the Genesis Industries would weaponize it and joined them in declaring war. After personally assaulting Genesis defenses in the battle that led to Orion's death, Aberion Ascended and currently works closely with the Overseers as they oppress the dimensions. 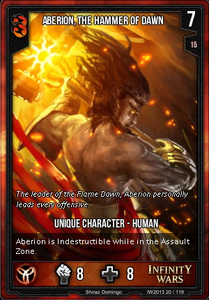 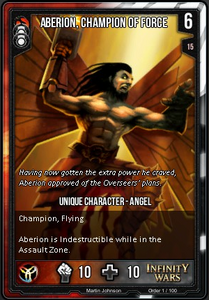 Aberion, Champion Of Force (Order)
Add a photo to this gallery
Retrieved from "https://infinity-wars.fandom.com/wiki/Lore:_Aberion?oldid=15749"
Community content is available under CC-BY-SA unless otherwise noted.