Agent Coyle is a human. His exact nature and role in the Lore is complex and contradictory.

Agent Coyle started out on Talich, absorbing power from the factions of the Flame Dawn and Genesis Industries. While it is unclear which faction he started with, Coyle definitely accompanied the forces from Talich to the Old World, where he absorbed skills from the Warpath to become the Primal Hunter.

Navigating his way to Reish, Coyle began to study the Descendants of the Dragon. 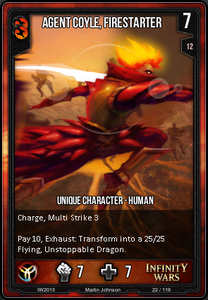 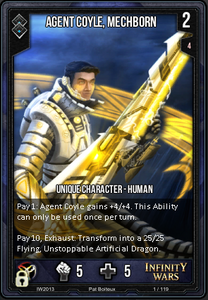 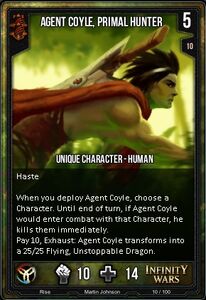 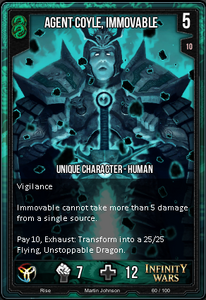 Agent Coyle, Immovable (Rise)
Add a photo to this gallery

The Arrival of Alpha One Edit

As Coyle became more aware of the threat posed by the Sleepers of Avarrach, Alpha One, a younger, more reckless version of himself that had jumped through a rift and somehow managed to time travel, appeared. Coyle made a deal with his younger self, allowing Alpha Coyle to absorb all of Agent Coyle's powers in order to fight the Sleepers.

Alpha Coyle promptly and recklessly fell in battle against the Sleepers, rising as a Zomborg and leaving the original Agent Coyle powerless. 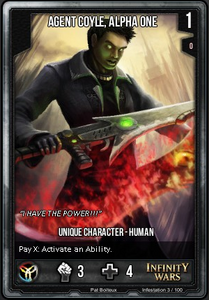 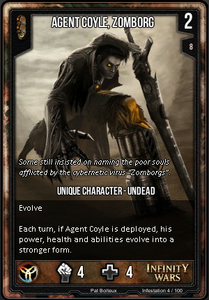 Agent Coyle, Zomborg (Infestation)
Add a photo to this gallery

To earn back some amount of power, Agent Coyle sold his soul to the Cult of Verore while Alpha Coyle absorbed the demonic power of the Exiles. It is not known as to how Alpha Coyle managed to shrug off the Virus.

Still in need of power, Agent Coyle joined up with the Overseers and Ascended. Afterwards, the the two Coyles met and fought a duel. In the midst of this showdown, the Coyles combined (as seen in Ethereal Fusion), creating Agent Coyle, DivineDemonic. 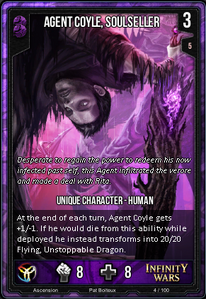 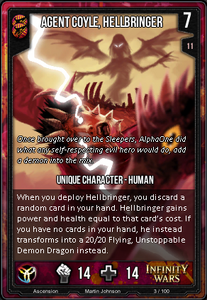 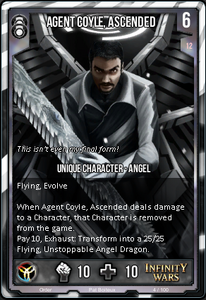 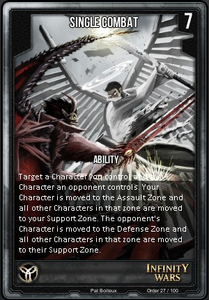 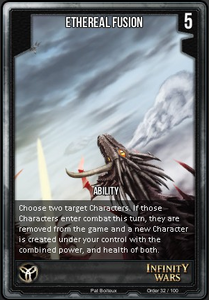 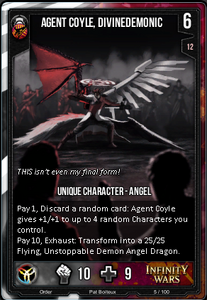 Agent Coyle, Divinedemonic (Order)
Add a photo to this gallery

With the release of Oppression, two final Coyles came out: Superior Symbiote and Assimilator. It is unclear what role these two Coyles play in the overall Coyle lore. 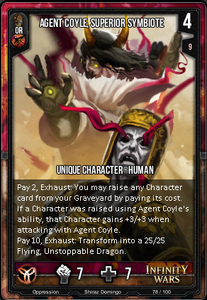 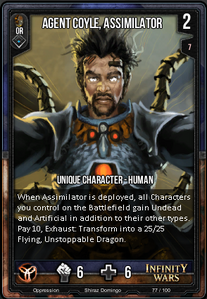 Agent Coyle, Assimilator (Oppression)
Add a photo to this gallery
Retrieved from "https://infinity-wars.fandom.com/wiki/Lore:_Agent_Coyle?oldid=16784"
Community content is available under CC-BY-SA unless otherwise noted.