Aleta is an immortal human being. Native to the Old World, she was involved in some way with the Calamity. After the Calamity, her memories were lost and she was split along with the dimensions. One version of Aleta resides in each dimension.

This splitting and memory loss exposed her to radical changes in her personality, according to which reality she inhabited. She has provided guidance for each reality for over a millennium, affecting them all in some way.

Residing in the Old World, Aleta, Immortal Caretaker provided guidance to the world's wildlife, currently known as the Warpath. When the Overseers arrived on the plane they decided to purge it of nearly all life, prompting Aleta to swear vengeance as Aleta, the Immortal Survivor. 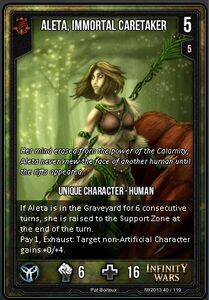 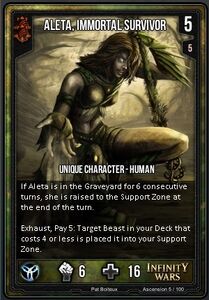 Aleta, Immortal Survivor (Ascension)
Add a photo to this gallery

An evil sorceress native to Reish, Aleta, Immortal Sorceress led the Cult of Verore and its explorations of dark magic. To augment her powers, she opened a series of portals to Torment and summoned many demons which she enslaved. The most notable of these was Vasir, the Demon Prince, who eventually escaped and imprisoned Aleta herself.

This Aleta resided in Avarrach. She fell in love with a mortal man, which attempted to create the key to immortality to be with her forever. He created the Virus of Avarrach in the process, unleashing one of the worst catastrophes the multiverse has ever suffered. Aleta alone was immune to the virus thanks to her immortality, but was nevertheless infected and driven insane over the centuries as the virus strove to break down and rebuild her body faster than her regenerative powers could heal her. She became Aleta, Immortal Sufferer. Discovered by the Talich Aleta, the Avarrach Aleta was brought back to Talich where the Genesis Industries scientists managed to cure her, as seen on the card Reborn.

Hailing from Talich, Aleta, Immortal Tinkerer was a brilliant yet antisocial scientist who discovered the existence of the multiple realities long before the rifts opened. As the forces from Talich came into contact with the Sleepers, Orion noticed that Aleta was immune to the Virus. He promptly dispatched her on a mission to explore Avarrach in hopes of finding a clue to defeat or cure the Virus as Aleta, Immortal Searcher. While there, the Talich Aleta discovered the Avarrach Aleta and brought her back to Talich for further study. 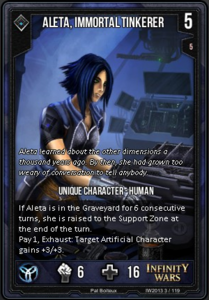 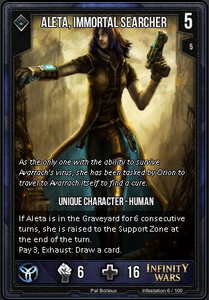 Aleta, Immortal Searcher (Infestation)
Add a photo to this gallery

A Factionless Aleta, the home plane and history of Aleta, Immortal Traveler is unknown.

Retrieved from "https://infinity-wars.fandom.com/wiki/Lore:_Aleta?oldid=15735"
Community content is available under CC-BY-SA unless otherwise noted.