Commonly known as "The Stalwart," Gao Han was a prominent member of the Descendants of the Dragon on Reish. He unshakably defended the Great Wall of Jinhai against all comers.

At some point following the arrival of the Overseers of Solace on the plane, Gao Han Ascended, becoming the Champion of Warding. It is unclear whether or not this was because of his great deeds against the Sleepers of Avarrach or in the Overseers' fight against the demons of Torment.

As the Overseers oppress the people of the mortal dimensions, it is unclear whether Gao Han's loyalty lies with the Descendants of the Dragon or with the Overseers. It is to be noted that Xi, who also Ascended, left the Overseers and returned to her people. 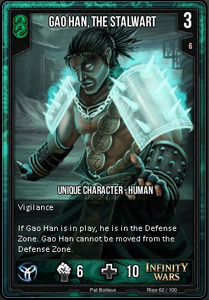 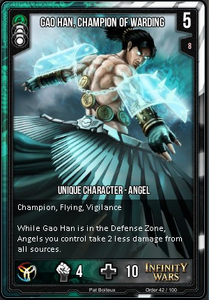 Gao Han, Champion Of Warding (Order)
Add a photo to this gallery
Retrieved from "https://infinity-wars.fandom.com/wiki/Lore:_Gao_Han?oldid=15742"
Community content is available under CC-BY-SA unless otherwise noted.