Justin was a citizen-employee of Genesis Industries, believed responsible for awakening the Sleepers of Avarrach.

While exploring Avarrach, Justin became interested in a clock tower that looked similar to the one in Lanstead. He began to explore the tower, taking note of the dormant Sleepers. However, Justin cut his hand on a sharp corner, spilling some blood to the ground and awaking the Sleepers. The flavor text of Undisturbed Necropolis tells us that the zomborgs tore Justin apart. 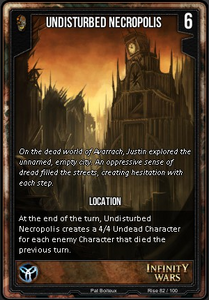 Undisturbed Necropolis (Rise)
Add a photo to this gallery
Retrieved from "https://infinity-wars.fandom.com/wiki/Lore:_Justin?oldid=15745"
Community content is available under CC-BY-SA unless otherwise noted.