Kali was a human mage living under a magic-using nation on Talich before it was conquered by the Flame Dawn. She joined the Flame Dawn military after her homeland fell and, with her magical ability to enchant her blades with flame, found great success there. She rose through the ranks of the Flame Dawn military, became Bromich's protegee, and was eventually assigned to lead the special faction of Purifiers against the undead threat.

When the Overseers of Solace arrived and the Flame Dawn allied with them, Kali was one of the Soldiers that was chosen by the Overseers to Ascend. 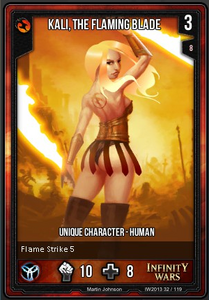 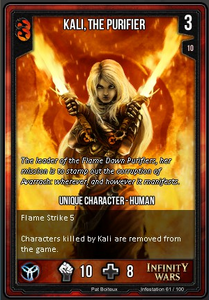 Kali, Ascended (Ascension)
Add a photo to this gallery
Retrieved from "https://infinity-wars.fandom.com/wiki/Lore:_Kali?oldid=15736"
Community content is available under CC-BY-SA unless otherwise noted.