Orion was the leader of Genesis Industries.

When war first broke out on Talich between the various nations, Orion forged a deal to supply weapons to the Flame Dawn in an effort to keep peace between them while turning a profit. During the war business was good, but as the war drew to a close and Genesis Industries was the only nation left, relations with the Flame Dawn became strained. Realizing that he had left his nation woefully unprepared for a fight against a war-based nation with all their latest technology, Orion set out to hurriedly build new technology which could combat the Flame Dawn. War between the two briefly breaks out before the rifts open up and both nations turn their attention to the new land available in what they call The New World (more commonly referred to as the Old World and the Untamed World).

As the Sleepers of Avarrach rose to prominence, Genesis managed to slow down the assault using its conventional weaponry. But as the infestation continued to spread, Orion sent Aleta, the Immortal Tinkerer through the rifts to Avarrach in search of a cure. While there, she discovered Aleta, the Immortal Sufferer, who she brought back to Talich to begin working on a cure. Meanwhile, the Overseers of Solace descended and began to eradicate the sleeper virus with the goal of completely eliminating the threat.

Orion, initially welcoming the Overseers' aid, quickly grows wary of their intentions. More interested in studying the virus to learn from it instead of merely eradicating it, Orion attempted to keep the presence of the Immortal Sufferer a secret. He hoped that even with the destruction of the Sleepers, the research to be gained from the Sufferer would benefit Genesis and allow them access to new technology.

When the Overseers learned that Orion was harboring a sample of the virus, they ordered him to destroy it fearing that he would attempt to weaponize it. Orion refused and the Overseers and Flame Dawn declared war upon the Genesis Industries. In one of the opening skirmishes of the war Orion was killed by Sol, but Genesis Industries fights on and has raised a monument in his memory. 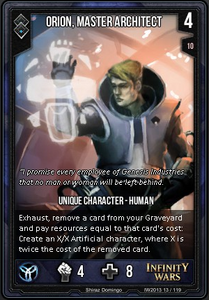 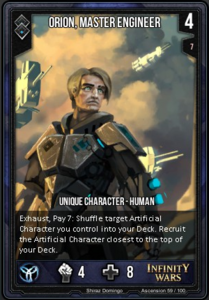 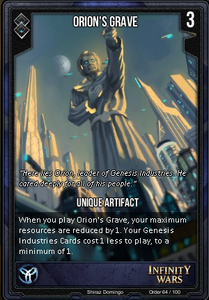 Orion's Grave (Order)
Add a photo to this gallery
Retrieved from "https://infinity-wars.fandom.com/wiki/Lore:_Orion?oldid=15738"
Community content is available under CC-BY-SA unless otherwise noted.