Torment is not one of the infinite dimensions created by the Calamity, and as such is not home to an Aleta. One way to think of it is as a metaphysical "underplane," and it is contrasted with the "overplane" of Solace. Both Torment and Solace predate the Calamity.

Torment is home to an army of demons who feed upon negative human emotions in their eternal war against the Overseers of Solace. These demons often have grotesque, deformed bodies that are adapted for specific purposes, such as having leathery wings for flight or expanded mandibles for consuming prey--or enemies.

Normally closed off from other planes, the Cult of Verore repeatedly opened up a series of portals from Reish into Torment, trapping and enslaving a number of demons for their power. The most famous of these portals is the immense Hellmouth. Most prominent of the captured demons from Torment is Vasir, the Demon Prince, whose imprisonment was the fragile key to Verore's power. When he broke free, Veroria was destroyed, Aleta was captured, and the Cult was scattered, leaving the portals to Torment open and unattended.

Although the demons of Torment are often associated with the Cult of Verore or the Exiles, in fact they belong to neither faction. While the Cult enslaved many of them, they owe the Verorian's no allegiance. Likewise, the corrupted and insane Exiles of the Demon Wastes congregate around specific demons--notably Vasir and Nysrugh--as leaders, but themselves are not from Torment. 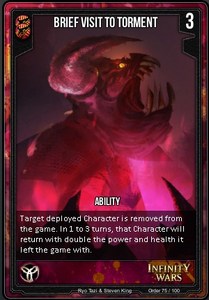 Brief Visit To Torment (Order)
Add a photo to this gallery
Retrieved from "https://infinity-wars.fandom.com/wiki/Lore:_Torment?oldid=16060"
Community content is available under CC-BY-SA unless otherwise noted.