Vasir is a powerful demon prince from the underplane of Torment. When Aleta, the Immortal Sorceress of Reish opened up portals to Torment, she imprisoned Vasir and other demons to gain power from them. Vasir's imprisonment was the most important, the fragile key to keeping the rest of the demons in check.

As the Exiles and Sleepers pressured the Cult of Verore, Vasir finally managed to break free. It is unclear whether he destroyed the Lone Keep of Veroria or if its destruction enabled him to escape, but either way he captured Aleta, scattered the Cult, and rallied the Exiles around himself.

After a minor run-in with the Overseers, Vasir is still at large and fighting against them. 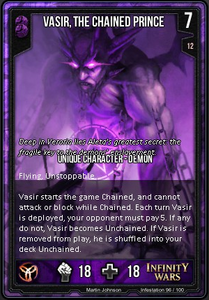 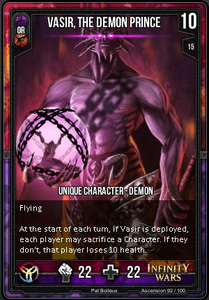 Vasir, The Demon Prince (Ascension)
Add a photo to this gallery
Retrieved from "https://infinity-wars.fandom.com/wiki/Lore:_Vasir?oldid=15748"
Community content is available under CC-BY-SA unless otherwise noted.