Xi is a powerful and prominent member of the Descendants of the Dragon. Extremely spiritual, Xi specialized in summoning the spirits of ancestors to come to the aid of the Descendants in their ongoing fight to defend their homeland from invaders.

When the Overseers arrived on Reish, Xi was one of the women chosen by Lilariah to Ascend. She aided the Overseers in the purging of the Sleepers, but afterwards appeared to have a falling out with the Overseers leadership and returned to her people.

As of Rebellion, Xi appears to have sacrificed herself in a bid for peace. 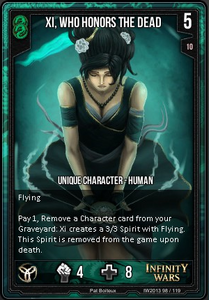 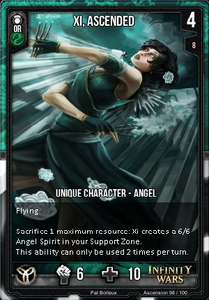 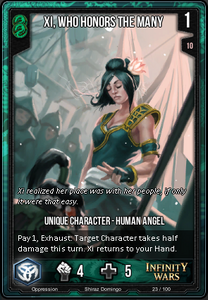 Xi, Who Honors The Many (Oppression) 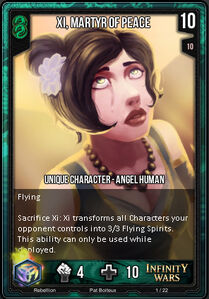 Xi, Martyr of Peace (Rebellion)
Add a photo to this gallery
Retrieved from "https://infinity-wars.fandom.com/wiki/Lore:_Xi?oldid=17216"
Community content is available under CC-BY-SA unless otherwise noted.