In Infinity Wars, there are five main types of cards that play different roles during the match, but all of them use a similar layout.

This Guide is designed to help you understand all the features of Infinity Wars cards (Cards Anatomy), though not all elements of a card of exist on all card types.

If you're looking for more detailed information on what various words on the cards mean, please see Terms. 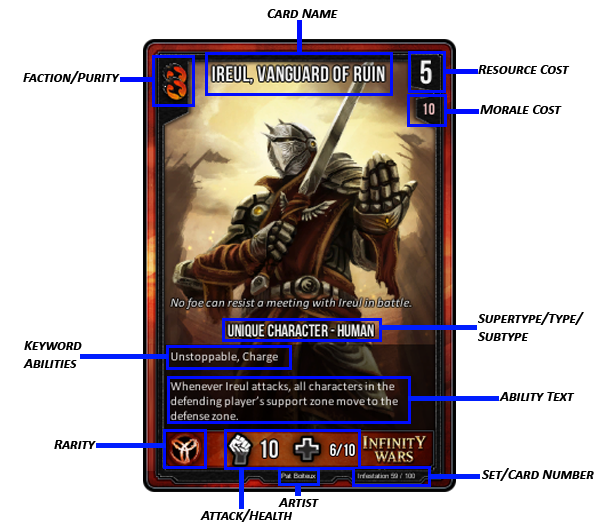 A card's Purity Requirement determines the legality of a card within a certain deck. A card is only legal in a deck if the Faction Purity of the deck meets or exceeds the Purity Requirement shown on a card. More information on purity can be found in Part 6: Deckbuilding.

In the example above, Ireul has a Purity Requirement of Double Flame Dawn.

A card's Resource Cost shows how many resources must be spent in order to play or deploy that card.

More information on resources can be found in Part 5: The Playing Field.

In our example, Ireul costs 5 resources to deploy.

A card's Morale Cost indicates the amount of Morale damage a player takes if one of his Characters is killed or destroyed while under their control. Morale Cost only appears on Character cards.

At the example above, if Ireul got killed or destroyed, his controller would suffer 10 points of Morale damage.

This is the name of the card. Ireul’s full card name is Ireul, Vanguard of Ruin.

The card Type lets the player know what kind of card this is. The card types can be "Characters", "Abilities", "Artifacts", "Locations" and "Missions". See Part 2: Types of Cards for more information.

Ireul is a Character card.

Cards' Supertypes and Sub-types give more information regarding the card. The cards Supertype comes before the card Type, and the Sub-type cames after it. Some cards in the game will refer to the supertype or sub-type of a card when determining effects.

At this page card example, Ireul’s Supertype is Unique and his Sub-type is Human.

The Keyword Abilities at the cards are special abilities that are shared by many characters and are indicated by keywords, in most cases players can pass the mouse over them to read a brief explanation of the ability. If you want to know more about Keyword Abilities, please see Terms.

Ireul, Vanguard of Ruin's Keyword Abilities are Unstoppable and Charge.

A card's Ability Text gives very important information on any special Abilities, modifiers, or effects that a card may have. Most of cards in Infinity Wars have a Ability Text, so it’s important to read and understand each card’s abilities.

In the card above, the Ability Text states that "When Ireul attacks the first time each turn, all Characters in the defending player's Support Zone are moved to the Defense Zone".

These stats are exclusive to Character cards. They determine the combat effectiveness of the Character. A Character’s Power is displayed next to the fist icon and the current Health and Max Health next to the cross icon.

A card's Rarity shows how rare a card is.

In Infinity Wars, card rarity is set in 5 tiers, being them "Common", "Uncommon", "Rare", "Epic" and "Legendary", with the symbols being silver, gold, blue, orange, and multi-colored, respectively. If you want to know more about card rarity, please visit Part 7: Trading and Rarity.

The Card Rarity affects a card's likelihood to be found in packs or drawn in Rift Runs and can affect a card’s legality for some formats or tournaments.

Ireul, for example, is an Epic card, and would therefore not be legal in a Pauper format game or tournament.

For more informations about a card’s legality for some formats or tournaments, please visit Part 5: Game Modes.

This shows what Set the card was released in and the card’s ID number at it. The card Set will also affect a card’s legality for certain formats or tournaments. For example, cards from Promotional Sets are not allowed outside of the Infinite format.

Ireul is the 59th card from the Infestation set.

This shows the person(s) who created the art for the card.

This page incorporates information from the Infinity Wars Comprehensive Rules and Mechanics Guide, brought to us by the awesome folks of the http://www.twitch.tv/nexustavern. The complete guide can be found here. At the moment, this guide is being updated by NatoPotato .

Retrieved from "https://infinity-wars.fandom.com/wiki/Understanding_Infinity_Wars_Cards?oldid=16039"
Community content is available under CC-BY-SA unless otherwise noted.