In Infinity Wars, the Playing Field represents the board on which each game is played and where the action takes place. Around it, are various important elements and other numerous interactive options.

The Playing Field is organized into a series of Zones and the Heads Up Display (HUD) provides a multitude of information.

As many cards reference certain zones on the Playing Field, it is vital for the players to understand and identify which zones are being referred to.

Additionally, properly using and understanding the actions and informations provided by the HUD, is also paramount to success.

This page is designed to provide a more effective comprehension of the Playing Field, a better understanding of the HUD and other key characteristics involving them. 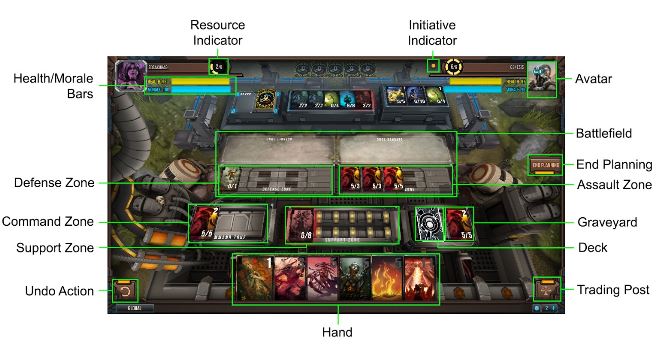 ​The player’s Hand is composed of cards drawn from the main deck. They are located at the bottom edge of the Playing Field and are revealed.

Players begin the game with a hand of 5 (five) cards and draw 1 (one) extra card at the beginning of every subsequent turn.

Players have a maximum hand size of 8 (eight) cards. At the end of planning phase, if a player has more than 8 cards in hand, he must discard down to 8. Discarded cards go the the Graveyard.

Selected cards may be played or deployed from the hand during the match for their Resource Cost.

Zones and Their Concepts Edit

At the beginning of the match, the Command Zone contains 3 (three) Character Cards in it. These are the player’s Commanders.

Any Character card that is compatible with the Purity of a legal Deck can be used as Commander.

Any Activated and Passive Abilities Characters cards may have at his/her Ability Text can be activated or triggered from the Command Zone, as long as the player has the resources and fill the requirements of the ability usage, unless otherwise stated on the card.

To move a Character out of the Command Zone, they must be deployed, by paying its Resource Cost.

Unlike when a Character is deployed from the hand, a Character at the Command Zone can be deployed directly into any of the other zones (Support Zone, Assault Zone or Defense Zone) and is not Exhausted upon being deployed.

The Support Zone is where most Characters Cards enter play when deployed. Characters in the Support Zone can use any Activated and Passive Abilities they have (as long as the player has the resources and fill the requirements of the ability usage), but, from this zone, they cannot attack the opponent Fortress or are able to defend (by blocking) their own.

Artifact, Location and Mission cards always stay in this zone after being deployed.

The Assault Zone is where a player may place any number of deployed Characters with which they plan to attack the opponent Fortress during the turn. The player’s Assault Zone sits opposite from the opponent’s Defense Zone.

More informations about how Combat resolves are described at the guide Turn Structure.

The Defense Zone is where a player may place any number of deployed Characters with which they plan to block during the turn. The player’s Defense Zone sits opposite from the opponent’s Assalt Zone.

In other words, the Defense Zone is the line between your opponent's Assault Zone and your Fortress.

During combat, Characters in the Defense Zone will attempt to block, one at the time, in the order they are placed, from left to right.

More informations about how Combat resolves are described at the guide Turn Structure.

"The Battlefield" is the area comprised of the Assault and Defense Zones of both players. Support Zones and Command Zones are not considered part of the Battlefield.

The "'Deployed Area" correspond to the zone comprised of the Battlefield and the Support Zone of both players. Any Characters, Artifacts, Locations, or Missions in these zones are considered to be “deployed” or "in play". A card “leaves the Deployed Area” when it is either destroyed, removed from the game, returned to the hand, etc.

The Command Zones are not considered part of the Deployed Area.

Cards are considered to be “In Play” if they are either in the Deployed Area or the Command Zone. A card “leaves play” when it is either destroyed, removed from the game, returned to the hand, etc.

Other Elements from the Playing FieldEdit

The Deck is where the player’s main deck sits during the game. At there, are all the cards a player haven't drawn yet, randomly shuffled and stacked.

By default, players will draw 1 (one) card from the Deck per turn, unless some other modifier is in effect.

The Graveyard is where Character cards go to after been killed, destroyed, died, sacrificed, etc.

After played and resolved, Ability cards also go directly to the Graveyard.

Finally, discarded cards are also placed into the Graveyard.

The Avatar is a small portrait each player uses to represent themselves.

The Health/Morale Bars show how much Health and Morale a player currently has.

At a match, both players starts it with 100 (one hundred) points in each bar.

Should either bar reach and remain at 0 (zero) for a player at the end of a turn, then that player loses the match.

Since the status of both Health and Morale bars are only checked at the end of a turn, it is possible for matches to end up in a draw, which can occur when 2 players lose simultaneously.

It is also possible for a player’s Health or Morale to reach 0 during the course of a turn, but if the player is able to recover their Health or Morale to be higher than 0 by the end of the turn, then that player will not have lost and play continues onto the next turn.

The Health Bar is displayed as a yellow bar bellow each player's name, and it represents the amount of damage a player's Fortress can stand.

When the Fortress Health Bar is depleted (reached 0), it means that your Fortress was destroyed or that your troops have been defeated.

The most common way that players can use to cause "damage" and subtract points from the opponent Health Bar, is by attacking his/her Fortress with the characters located at the Assault Zone.

Of course, the opposing player can use his/her own characters to defend his own Fortresses, as explained above.

The Morale Bar is the blue bar displayed below the Fortress Health bar, and it represents the capacity of a player to maintain the will to fight. When the Morale Bar is depleted (reached 0), it means that your unit's morale cracked, making them to surrender or just give up the fight.

The most common way for a player to lose morale (take morale damage) is by having their Character Cards killed or destroyed, which subtract points from the Morale Bar according with that Character Morale Cost.

The Resource Indicator shows the maximum and remaining resources a player has during the turn. Basically, each turn, players can use the maximum number of resources he/she has at the indicator.

For more informations about Resources, see the Turn Structure Guide.

The Initiative Indicator is a yellow dot that can be found near the players name, next to the Resource Indicator.

This indicator switch from player to player every turn, showing who has the Initiative for the turn.

When a player has the Initiative for the turn, it means (among others) that his/her Activated or Passive Abilities will resolve first, and that his/her Characters will also attack first during combat, while the Characters belonging to the other player will defend first.

For more informations about Initiative, see the Turn Structure Guide.

The Undo Button allows the player to take back a planned action for the turn.

Before the end of the Planning Stage, actions like deploying Characters, Artifacts, Locations, Missions and playing Abilities cards can all be undone. Activating the abilities of cards in play can also be undone.

The same applies to some start of turn decisions, such as the decision to sacrifice a character to Vasir, the Demon Prince or to pay 2 resources to keep the Bomb-bot from exploding.

Some actions cannot be undone, but that will be specified.

What else id good to know:

The Trading Post is the "Scales of Justice" icon in the lower right corner of the HUD, and it enable the player to perform the following special actions, during a turn:

When the Trading Post reffers to "Pay 3", "Pay 5" or "Pay 9", these numbers are the amount of resources the player must spent in order to use the elected action. A player may use these special actions as long as he/she has resources to pay for it.

The End Planning button is clicked by players to indicate they are done with the Planning Stage of their turn and are ready to move on to the Resolution Stage.

In Player versus Player games, a timer appears near this button to indicate how many time the players have until the end of the turn. Once both players have hit their End Planning buttons, or the timer has expired, the turn moves to the Resolution Stage.

This page incorporates information from the Infinity Wars Comprehensive Rules and Mechanics Guide, brought to us by the awesome folks of the http://www.twitch.tv/nexustavern . The complete guide can be found here . At the moment, this guide is being updated by NatoPotato .

Retrieved from "https://infinity-wars.fandom.com/wiki/Understanding_The_Playing_Field?oldid=16388"
Community content is available under CC-BY-SA unless otherwise noted.